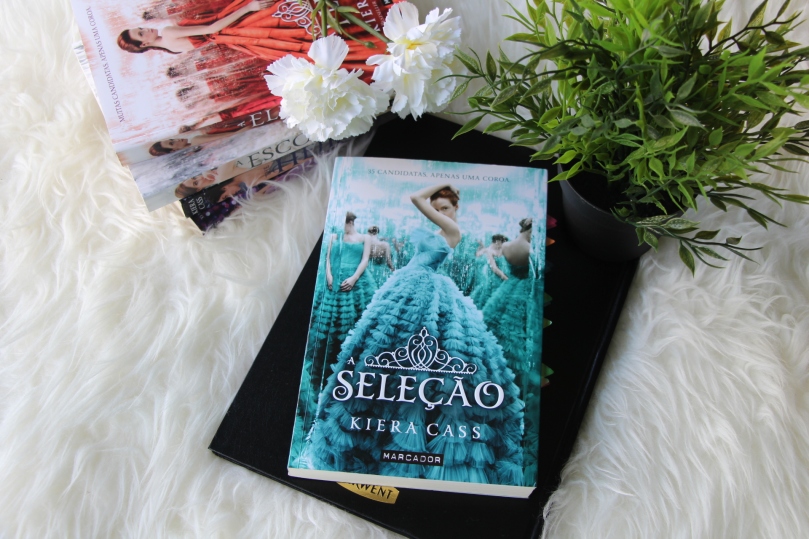 The Selection by Kiera Cass

For thirty-five girls, the Selection is the chance of a lifetime. The opportunity to escape a rigid caste system, live in a palace, and compete for the heart of gorgeous Prince Maxon. But for America Singer, being Selected is a nightmare. It means turning her back on her secret love with Aspen, who is a caste below her, and competing for a crown she doesn’t want.

Then America meets Prince Maxon—and realizes that the life she’s always dreamed of may not compare to a future she never imagined.

America Singer (yes, weird name, because she is a singer and blah blah doesn’t make sense, but it grows on you!) is selected as one of the 35 girls who will move to the royal palace and compete for the heart of the Prince. The problem is, she has sort of a boyfriend at home. Her family really needs the money that comes from being a Selected though, so America reluctantly agrees to participate and ends up being chosen. She is also surprised that Prince Maxon is not quite the snob rich idiot she imagined.

There was plenty of girl drama in the book that provided some funny moments and others that made me irritated because I would probably strangulate some of them. 😛  I felt like I really understood America’s mixed feelings, and I was able to root for her.

I would say this is one of my guilty pleasure books! And I love it!

After re-reading this book I feel that I love it even more than before! I always liked these books but I didn’t remember how much! The Selection is what I call a fluffy book. The cover is beautiful and amazing but the story is even more!! I am not saying that this is the best book in the world but it’s funny, lighthearted, a fast read and it’s just sweet!

I remember the first time I read it I couldn’t put the book down and it happened again! I tried to but I always wanted to know what happened next, even tho I already knew. 😛

The characters are pretty simple but I actually liked them. Starting with Maxon, he is, well, too good to be true — friendly, hoping for romance, respective, charming but shy, etc. Than we have Aspen, I didn’t like him very much, there’s stuff that can look sweet for some person but from not at all – him thinking that he should be the one helping America and not the contrary – it looks wrong and sexist. So although I don’t have much against him I would much more prefer to see her with Maxon.

America is a sweet girl that loves her family and although she belongs to a lower part of the society, she loves what she does and she is pretty determined when she wants. Also she has a golden heart comparing to half of the girls in the selection.

Also I really enjoyed the friendship between her and Maxon, and I feel that it was a very important part in the book that separates it from all the others, because who can just arrive there and already love someone that they never met?

At the end of the book, America was ready to consider it and state that she would be making a choice – between Maxon and Aspen – for herself and not to please one of them. It seems unfair and treason but inside a selection where Maxon is kissing everybody there is not much difference (well, kinda). So I was happy with her decision.

Other thing I liked was that, for the most part, the participants wished each other well and helped one another. There’s always a mean girl, of course, and there wouldn’t be much drama if there wasn’t a scumbag. But the feeling of sisterhood that grows between the contestants is a nice touch.

The world building appears in just a bit and I would hope there was more since it’s a dystopian book, the world is something I think a lot of people would like to see about.. But what we have is just a tiny bit, and we know has much as the lower part of the society, which is pretty much nothing.

Long story short, this book is passed in our world after a Third World War, where China took over America and created the “American State of China” After that they had to defeat Russia and a person named Illéa was in charge of that, he became important and  when he married to a person of the royal family, he was named king and the country started to be called Illéa.

In Illéa, the society is divided in castes, where the number one represents the royal family and they live a good life and the lowest one is number 8 and they are treated as if they didn’t even exist. America belong to number 5, and because in each of them they already have the professions they should follow, she has to choose arts, in this case music. A lot of people starve for others to live with everything and so one. It’s a bit similar to Hunger Games in this part.

That’s basically it for the world building, it’s not believable but it’s just there in 3 pages, because mostly it’s a bout the girls trying to get Maxon’s attention to marry them. It’s a fun addicting story, it has some romantic cute moments and others that you could just arghh 😛 I would say this is one of my guilty pleasure books! And I love it!

Can’t wait for the next book AGAIN!

Did you read this book?

2 thoughts on “Review: The Selection by Kiera Cass”