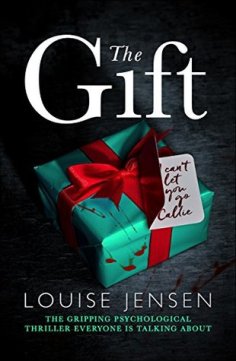 The Gift by Louise Jensen

Jenna is given another shot at life when she receives a donor heart from a girl called Callie.Eternally grateful to Callie and her family, Jenna gets closer to them, but she soon discovers that Callie’s perfect family is hiding some very dark secrets …

Callie’s parents are grieving, yet Jenna knows they’re only telling her half the story. Where is Callie’s sister Sophie? She’s been ‘abroad’ since her sister’s death but something about her absence doesn’t add up. And when Jenna meets Callie’s boyfriend Nathan, she makes a shocking discovery.

Jenna knows that Callie didn’t die in an accident. But how did she die? Jenna is determined to discover the truth but it could cost her everything; her loved ones, her sanity, even her life.

The story starts with a young woman named Jenna dying. And for that not to happen, she needs a heart transplant. After some time, she starts having weird dreams and feeling paranoid that someone is watching her. But, because the medicine she is taking is very strong and can create those type of side effects, she doesn’t know if it might be that.

After sometime, she gets in touch with the donor’s family and she can’t believe that anymore. She starts thinking that her new heart is trying to tell her something about the donor, something important. But the more she tries to know what happened to the donor, the more dangerous it gets.

I never read many thrillers before because I get stressed very easily. But last year I started reading some, and now every time I end one, it always leaves me with the need for more. They are quite addicting and this one was no exception!

The Gift has as a base for the story the concept of cellular memory. It says that the body can store memories outside the brain. Some believe that it’s possible to transfer memories trough the cells and that sometimes happens when a person has a transplant.

In the book Jenna inherited the memories of the organ donor. She starts having dreams about her life, liking or disliking the same things as the donor, … There are lots of stories about that and some are even present in the book, that our principal characters uses to backup her idea of it, that is received by her therapist with skepticism. But she doesn’t give up on the idea. She believed that the donor’s death wasn’t an accident, and tries to organize the dreams and resolve the mystery.

I really enjoyed the chapters on the memories. And that made me create my own hypothesis for what happened. But in the end i was deeply wrong. The book has a very interesting twist and gets very emotional as you read it. I am happy to say that everything I thought I knew, was in the end deeply wrong.

Jenna is a very interesting and complex character. She makes a lot of mistakes but it’s impossible not to like her anyway. She was quite damaged with all that was going on, and sometimes it was difficult to trust her. She was always forgetting stuff and it was difficult to know one of the girls started and the other ended. But the more dangerous the book turned, the more connection I felt with Jenna.

The only thing I didn’t like about Jenna is that she pushed Sam away. Sam is her ex-boyfriend, and although I fully understand why she did it, it was still difficult and I couldn’t agree. But honestly I don’t know if I wouldn’t have done the same… Sam is the best boyfriend anyone could have. He is sweet, loyal and always there when needed.

And of course the writing. That was wonderful and gripping. It held the mystery in a way that was fantastic and it kept me connected throughout the whole book. Although the beginning, if I’m being honest, wasn’t getting me very excited, as you can see that absolutely changed! Also, the pace was just right and I could just feel the character and their emotions resonating in me.

I would definitely recommend this book, especially if you like Psychological Thrillers like I do. You will not be disappointed! I really want to read The Sisters also by Louise Jensen. I heard great things about it! And since I liked this one so much… Why not, right? 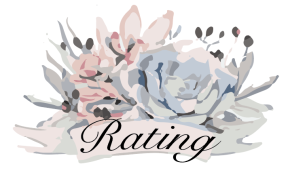 What’s your favorite psychological thriller? Why?

9 thoughts on “Review: The Gift by Louise Jensen (spoiler free)”