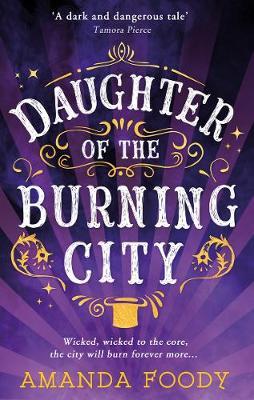 Sixteen-year-old Sorina has spent most of her life within the smoldering borders of the Gomorrah Festival. Yet even among the many unusual members of the traveling circus-city, Sorina stands apart as the only illusion-worker born in hundreds of years. This rare talent allows her to create illusions that others can see, feel and touch, with personalities all their own. Her creations are her family, and together they make up the cast of the Festival’s Freak Show.

But no matter how lifelike they may seem, her illusions are still just that—illusions, and not truly real. Or so she always believed…until one of them is murdered.

Desperate to protect her family, Sorina must track down the culprit and determine how they killed a person who doesn’t actually exist. Her search for answers leads her to the self-proclaimed gossip-worker Luca, and their investigation sends them through a haze of political turmoil and forbidden romance, and into the most sinister corners of the Festival. But as the killer continues murdering Sorina’s illusions one by one, she must unravel the horrifying truth before all of her loved ones disappear.

This is such a good Halloween book! It’s a paranormal fantasy book set in a traveling city called Gomorrah. It’s not in any way a normal city, it’s basically a gigantic traveling festival, full of magic.

It’s not as much about circus as I was expecting, is basically a mystery book, where our main character Sorina is trying to find out why, how and who is killing her illusions. She makes illusions that are incredibly realistic; they are able to smell, touch, and they have their own personality, just like a human being. But since they are, in the end, illusions, they shouldn’t be able to die!

The book has such a cool concept! I loved all the characters and the magic and for a while it really fooled me, but halfway I kinda saw the end coming. However, there were many things I didn’t expect at all and that left me open-mouthed! This book is full of twists and the world itself is really mysterious, although I would have loved some kind of a map… It’s a traveling city, but the city itself has a structure and the world around too, and I feel that it was a bit difficult at times to situate.

I found it really nice that there are draws of the illusions throughout the book and I loved how different and unique they are! They were just so amazing! I loved every single one of them and it was really hard to see them being killed and seeing the family grieving…

The rest of the characters are mainly magicians, thieves, assassins and sex workers and not really what you would expect of a circus. But I loved meeting some of them. All the characters are just so interesting and one of the best ones is Luca! He is just so cool and arrogant in a very attractive way. Ah, I loved him! And I loved seeing him with Sorina! They are both “freaks” but they cope with that in very different ways, Luca embraces it somehow, while Sorina has a bit of a hard time with it.

As I said previously, I really liked the magic in this book, but it was a bit confusing at times. The jinx-works were many and they were very complex. I found it really nice but I  would love to know more. It’s a fascinating story and the writing was really nice and gripping.

I would definitely recommend it and it’s a perfect book for Halloween! It’s a fascinating story with a lot of magic, darkness, family love and acceptance.

Have you read this yet? What’s your favorite character? Let’s discuss it in the comments below!

10 thoughts on “Daughter of the Burning City by Amanda Foody”