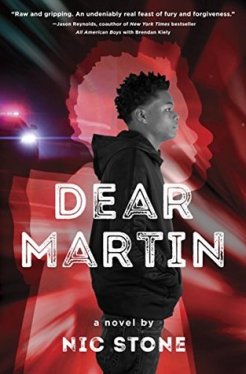 Justyce McAllister is top of his class and set for the Ivy League—but none of that matters to the police officer who just put him in handcuffs. And despite leaving his rough neighborhood behind, he can’t escape the scorn of his former peers or the ridicule of his new classmates.

Justyce looks to the teachings of Dr. Martin Luther King Jr. for answers. But do they hold up anymore? He starts a journal to Dr. King to find out.

Then comes the day Justyce goes driving with his best friend, Manny, windows rolled down, music turned up—way up, sparking the fury of a white off-duty cop beside them. Words fly. Shots are fired. Justyce and Manny are caught in the crosshairs. In the media fallout, it’s Justyce who is under attack.

I love books like this one. They are so important in our lives! This is the type of book everyone should read.

It may not seem like it, but it talks about the reality of our world. It’s the 21st century and racism still exists. After so long and so many things changing and evolving… Things might be different for the better, but that’s not good enough. Racism should be a thing long gone and yet here we are with people getting murdered because of it, getting worse jobs, getting disrespected, among other things. Meanwhile, equality and freedom are the words spoken to describe nowadays…

I can’t imagine how is it possible to live with all that cargo… Knowing that you can get murdered because you, unfortunately, were born with the wrong colored skin?! Treated as if you are not even human because of that? Constantly being looked at through the corner of the eye because you are certainly up to something? Constantly being said that you are less than a white person? That you couldn’t ever be this or that because of that? … I mean… Is that even a life? Can you imagine how these people must feel? It’s terrifying.

But Justyce knows how that feels like… He has suffered injustice after injustice, until one day one changed everything.

This book is in a way similar to The Hate U Give, after all, the topic is the same. But the way that is approached is really different. I still do prefer THUG in terms of plot but I loved how in this book we have a male POV. Primarily because just like both books show,  black teenage boys have it even tougher than girls, the racism is even worse since black teenage boys equal gangster, carrying a gun, selling drugs, capable of anything, etc. In THUG we see the life of a black boy through the eyes of a black girl, here we have that black boy… So that was really powerful in this book. Secondly, because I almost never read books with male POVs.

I really liked Justyce and I think he was a really good person, and his idea of writing letters to Martin Luther King Jr. was really interesting. But on the other side, I also think that he was a bit lost and clueless. He wanted equality and he saw that that was not happening and after that, he didn’t do much more? I liked the moral of the story but I just wanted a bit more passion from him? I felt that even SJ had more fire in her than him. God, even Manny, and he was the quietest of them all! Although he was definitely my favorite character… I just really liked to see him trying to fit in and being a bit oblivious and suddenly waking up… Just like Justyce – but I just didn’t connect as much…

I also really liked that how in this book we have different perspectives. We have white idiot boys, black idiot boys, white amazing girls, black amazing boys, racist black persons (which I really liked the addition) and racist white persons (I hated them so much… It made me so angry!). There’s a mix of everything and it made it a lot more interesting.

As for the plot, I really liked the debates in the book, they made it really realistic and gripping. But the best part was around halfway… This book was killing me! I was not expecting anything like that and it broke my heart. I feel so revolted! This book really hit me big time. I still have difficulty seeing the “why” things like this happen. How is it still possible after so much time… I feel really upset. There were some things I wanted a bit more, especially out of the plot and the main characters but it’s a fantastic book nonetheless and really… Just read this book!

This is an important, timeless, strong read. It’s gripping, it’s beautifully heartbreaking and it should be read by everyone. Definitely, recommend it.