Hi guys! So, I’ve been reading quite a bit of manga and I came across some new manga classics that I wanted to read. Since my reviews for manga tend to be on the slimmer side, I decided to post two per post since they are from the same publisher, although the authors vary.

These ones are two new releases:

I have never read any of these classics yet, so keep in mind that my review is solely about the manga version without any comparison.

I was really excited for this book since I’ve never read the original classic but I’ve always wanted. I can’t say this is one of my favorite manga classics. But it’s a pretty good one nonetheless. It talks about racism, feuding families, abuse, alcoholism, friendship, etc. It’s quite a full novel and an interesting one. Some parts are more interesting than others but all of them talk about important matters.

I really liked the story for how fun yet heartbreaking it is. The best part for me was the humor. Now, I don’t know how humouristic is the original one, but if it is something like this, I will definitely enjoy it.

I loved all the adventures and how ridiculous some moments were. There are all types of persons in this book, but my favorite was Jim! Some characters really made me mad although they were ridiculous… But Jim is such a precious character! I really liked Huckleberry Finn and Tom Sawyer, especially together! They are just so spirited and strong boys always trying to do the right thing. But what is the right thing?

That’s what a lot of the book is about. It has a lot of racism and Huckleberry Finn didn’t know what he should do. Should he help Jim or not? Black people were supposed to be slaves and not friends. So the right thing would be to enslave them, or in case of a runaway, take them to their owner. And so, he decided to do the wrong thing and free him. It was really interesting seeing him trying to see what is the right thing to do and what he actually did.

The adventures were quite funny and interesting and the art only made everything better. Things happen quite quickly so I definitely want to read the original classic. But it was overall a very expressive, fun and important novel about racism – in a lovely format if you enjoy manga! 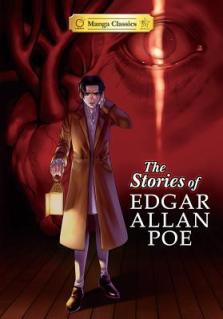 Once again, I never read the original book and to be honest I don’t really know what to think of it. The manga is divided into 5 short stories. And some of them are really tiny! I have no idea how they are in the original classic but in this one, although some are a bit difficult to understand since there’s not much of a context, they are fascinatingly terrifying!

Also, I have to mention that all the short stories are drawn by a different artist, which I thought to be really interesting. Not only because we can see different styles but because it makes it easier to separate the stories…

I will talk about them briefly in separate:

I actually enjoyed all the stories and the art. They are all really different from each other, the only thing in common being how dark they are. I surprisingly loved this manga and for sure I need to read more Edgar Allan Poe! Totally recommended if you are into dark or unsettling stories!

Have you read these yet or any of the original classics? What’s your favorite story? Let’s discuss it in the comments below!