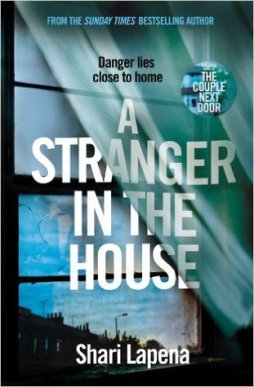 He looks at her, concerned. “How do you feel?” She wants to say, Terrified. Instead, she says, with a faint smile, “Glad to be home.”

Karen and Tom Krupp are happy—they’ve got a lovely home in upstate New York, they’re practically newlyweds, and they have no kids to interrupt their comfortable life together. But one day, Tom returns home to find Karen has vanished—her car’s gone and it seems she left in a rush. She even left her purse—complete with phone and ID—behind.

There’s a knock on the door—the police are there to take Tom to the hospital where his wife has been admitted. She had a car accident, and lost control as she sped through the worst part of town.

The accident has left Karen with a concussion and a few scrapes. Still, she’s mostly okay—except that she can’t remember what she was doing or where she was when she crashed. The cops think her memory loss is highly convenient, and they suspect she was up to no good.

Karen returns home with Tom, determined to heal and move on with her life. Then she realizes something’s been moved. Something’s not quite right. Someone’s been in her house. And the police won’t stop asking questions.

Because in this house, everyone’s a stranger. Everyone has something they’d rather keep hidden. Something they might even kill to keep quiet.

This was quite a surprise… I didn’t start very well with this book but I ended up reading it in one day. It’s quite a fast read. I thought it was gonna be easy to see the end but the thing about this book is that every clue we get, one more is hidden… It has a lot of twists, some good some meh, but in general, the end still managed to surprise me!

This was the first book I read from Shari Lapena. I heard a lot of missed reviews about her debut novel although mainly good things. But to be honest the only reason I got this book was because of the Spookathon. But I’m really happy I got it because it actually took me out of the reading slump I was in! I guess I needed a fast-paced book…

I enjoyed the characters although I didn’t like them. They were not particularly interesting or thrilling but they were quite different from what I’m used to reading. On the outside, they may look very normal but they were really weird and twisted persons!

Tom is the supposedly perfect husband who doesn’t know if he trusts or doesn’t trust her wife. Who has secrets but can’t believe other persons may have as well, who for some weird reason acts like a little kid. I despised him and how people liked Tom.

When it comes to the writing tho. That was my main problem. Since the first pages, I saw the writing as stiff. It’s all done in very tiny phrases. Which makes me read like a little kid. I just wasn’t keen on it, but it still managed to grip me. For some weird twisted reason, it worked…

The mystery itself was interesting. And like I said, in the beginning, it’s very twisty. Each twist has a twist behind and that totally gripped me. I saw many things coming and yet the end still surprised me. Not much because of the plot but because of the characters! They are for sure freaking messed up. I think this is a book very easy to read and I still enjoy it for the messed up story it has, and the stupid-butt characters it had.

Have you read this yet? What did you think of it? Let’s discuss it in the comments below!

One thought on “A Stranger in the House by Shari Lapena”