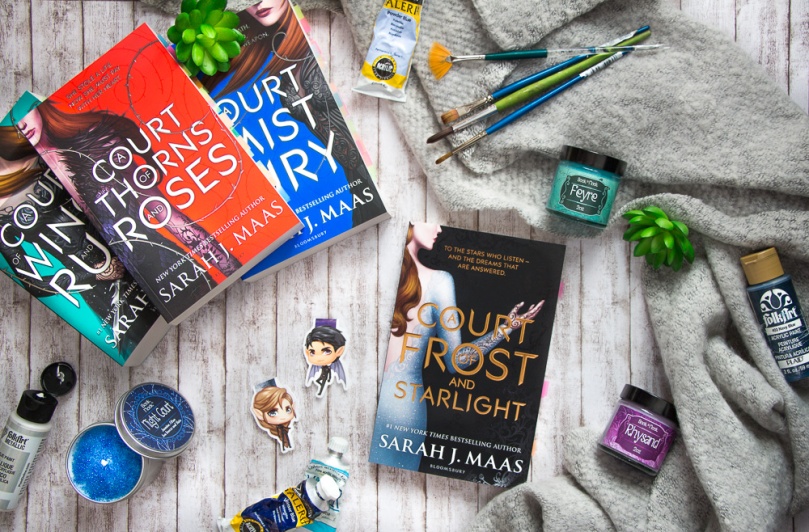 The Winter Solstice. In a week. I was still new enough to being High Lady that I had no idea what my formal role was to be. If we’d have a High Priestess do some odious ceremony, as lanthe had done the year before A year. Gods, nearly a year since Rhys had called in his bargain, desperate to get me away from the poison of the Spring Court to save me from my despair. Had he been only a minute later, the Mother knew what would have happened. Where I’d now be. Snow swirled and eddied in the garden, catching in the brown fibers of the burlap covering the shrubs My mate who had worked so hard and so selflessly, all without hope that I would ever be with him We had both fought for that love, bled for it. Rhys had died for it.

This was different. I liked it but I didn’t expect it… I guess I was expecting something else, although not quite sure what.

A Court of Frost and Starlight follows A Court of Wings and Ruin, after a few months passed. Everyone is preparing for the Winter Solstice. And on a time that is supposed to be happy and magical, each of our characters is, in their own way, suffering the repercussions of the war.

I would be lying if I told you didn’t miss all these characters. They are some of my favorites and it will always be something special to read about them, but for some reason, it took me a bit to enter in this book. Maybe because it’s quite slow – especially at the beginning, telling everything that has been happening with each character. Don’t get me wrong, I enjoyed it, but it was a bit difficult to enter it and there’s just not much happening here.

I loved how balanced it was. There’s a lot of sadness but also a lot of moments where I laughed. I just really loved the Inner Circle interactions! They are so different and yet so connected! It really gives me the warmest of feelings!

There is a thing I will never be okay with, in these books. The sex scenes/sex talk are so incredibly cringey. I just can’t handle them! And this book has way too much of it for such a tiny book! But other than that, I did enjoy this book, especially how packed with emotion it is. After the war, everyone has their fair share of problems and feelings, and it was nice to see that. It felt realistic and sometimes it even caused me to tear up a bit.

Overall this was a very pleasant book to read. It gave me a happy feeling reading it and the best part about it was obviously the characters. I loved seeing them again! But also the meaning of art that the author tries to transmit. We knew Feyre loves art and uses it as a way of putting her thoughts and emotions in order, I too love art and thought it quite an important and thoughtful message!

I would definitely recommend it if you enjoyed the “trilogy”! It’s not the best book ever, and to be honest, not much happens. But it’s a pleasure to see the Inner Circle again and what they are up to. Plus it does give a good bridge to continue with the series!

*Also, that cover is complete goals!!*

2 thoughts on “A Court of Frost and Starlight by Sarah J. Maas”