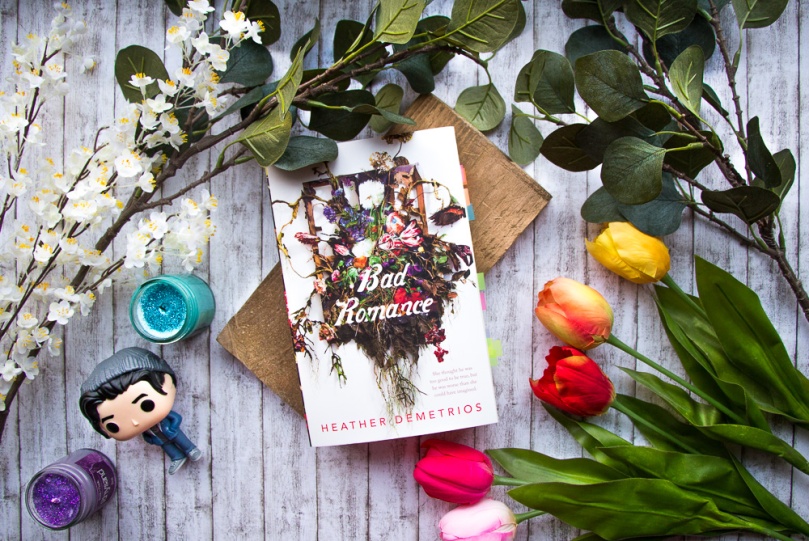 Grace wants out. Out of her house, where her stepfather wields fear like a weapon and her mother makes her scrub imaginary dirt off the floors. Out of her California town, too small to contain her big city dreams. Out of her life, and into the role of Parisian artist, New York director—anything but scared and alone.

Enter Gavin: charming, talented, adored. Controlling. Dangerous. When Grace and Gavin fall in love, Grace is sure it’s too good to be true. She has no idea their relationship will become a prison she’s unable to escape.

A deeply affecting and unflinchingly honest portrayal of a destructive relationship, Bad Romance is a young adult novel about spiraling into darkness—and emerging into the light again.

This book was incredibly difficult to read! It was extremely intense and emotional and most of all, utterly realistic! It really did take a toll on me, and I believe it would do that to anyone… It’s an extremely heavy book, but it’s 100% worth the read!

Bad Romance portrays the slow flourishing of an abusive relationship, especially as a teenager. Our MC, Grace shows us her past experience “step-by-step” – the progression of it, her doubts, her reasons, her feelings, and everything an abusive relationship entails  – told from both her perspective at the moment and some afterthoughts.

It has quite some triggering points, such as suicide, abuse (mainly mental but a bit of physical too), rape and unhealthy relationships, both romantic and family relationships. Those are the reasons this book is not easy to read, but more than that, the realistic way we see the manipulation occur, really makes you think and feel… It’s stressing, emotional and excruciating – mainly because the writing really makes it feel that we are inside the relationship and it makes it much more hard-hitting that way.

This book shows how easy it is to enter an abusive relationship, how easy it is to stay in one, and how hard it is to leave one. Extremely hard, but not impossible. For all the bitter-sweetness in this book, sometimes we can spot a very dim light at the end of the tunnel, through friendship and resolution. We also get to see not only a teenage abusive relationship but also an adults’ experience of it, and the effects it can have on a family, which made it even more intense… Her family relationships made it as excruciating as her love one and it was just so heartbreaking! And yet among all the bad moments, you just can’t 100% hate them and that’s the biggest problem!

It was intense how, even tho Grace can see an abusive relationship right in front of her, she failed to understand she was in one too. It makes you think… If her home life had been different would she have ended up in a relationship like this? I believe it’s possible she would but probably not as easily… After all, one does anything to escape sadness, and finding the tiniest amount of love and happiness, makes it already better, or does it?

This was the most realistic and detailed story of a toxic relationship that has ever been written. The writing is gripping and powerful, the plot is absurdly realistic and emotional and the characters are extremely engaging to the point that sometimes you will probably see yourself trying to give second chances to the abusive part and thinking what if. After all, no one can say he didn’t look amazing from the outside, right? And his actions were sometimes just, so good, you know?

That’s why this book really messes up with your mind! You can totally understand why someone would end up in a situation like this one. It really hit me hard and sometimes I (scarily) understood Grace’s actions, while other times I wanted to shake her, but the outside is always easier, right? Inside it’s all shades of grey, to the point of being impossible to make any distinction on anything anymore, all you know is how you feel, and that’s what this book showed so very well!

But another big point of this book is the fantastic friendships in it! A lot of times when you enter an abusive relationship you distance yourself from your friends, and we see a bit of that here, but we also see friendly love and how much they try to help and try to give strength to Grace, while others are completely oblivious of the situation. Her friendship with Lys and Nat is PERFECT! I absolutely adored how different they were from each other and how perfectly they fit together! But even with amazing friendships, which unfortunately not everyone has… Remember, one can only be helped so far, and even that help requires the first step of talking.

I think this is a book that must be read, it gives a lot of highlights on how to see if you are on abusive relationships and that it is possible to get out of one! It’s an extremely bitter-sweet (more to the sad side) and powerful read that I would recommend to everyone!

One thought on “Bad Romance by Heather Demetrios”