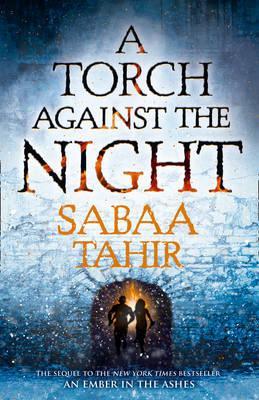 The sequel to the explosive New York Times bestselling debut AN EMBER IN THE ASHES that s captivated readers worldwide.A TORCH AGAINST THE NIGHT takes readers into the heart of the Empire as Laia and Elias fight their way north to liberate Laia s brother from the horrors of Kauf Prison. Hunted by Empire soldiers manipulated by the Commandant and haunted by their pasts Laia and Elias must outfox their enemies and confront the treacherousness of their own hearts.In the city of Serra Helene Aquilla finds herself bound to the will of the Empire s twisted new leader Marcus. When her loyalty is questioned Helene finds herself taking on a mission to prove herself a mission that might destroy her instead. About the AuthorSabaa Tahir grew up in California s Mojave Desert at her family s eighteen room motel. There she spent her time devouring fantasy novels raiding her brother s comic book stash and playing guitar badly. She began writing An Ember in the Ashes while working nights as a newspaper editor. She likes thunderous indie rock garish socks and all things nerd. Sabaa currently lives in the San Francisco Bay area with her family.

Some parts I can’t say they weren’t obvious… But somehow they still managed to be exciting when they happened. But the biggest surprise in this book has to be Laia. A resilient, strong-willed, and fiery person, Laia is much like she was in the first book, but here we get to know her a lot more than that – including things about her I never thought possible. We also get to see her connections with Elias and Keenan twist and turn in completely unexpected ways – with Laia, the world around her just doesn’t stop spinning, but something surprising is happening all the time.

As for Elias, I’ve liked him since the first book for his righteousness. He has a good heart, and he always thinks the part of doing good before anything else. And that, for the Masks, really doesn’t fit, which drove Elias into a conflict inside himself – whether to live as a Mask, or listening to his own heart. But if we thought Elias’s life was difficult, it gets worse. As for him and Laia, I kind of see them as the two halves of one whole piece: they complete one another, even though we don’t get a full-blown romance between them here.

Now, moving on to Helene! It’s difficult to like Helene for sure, but it’s also difficult to hate her? I know deep inside she is not that bad but… argh!! She is so freaking blind and mean! The author does a great job making you, in a way, understand her. She blindly believes in what she does, even if it’s not the absolute right thing to do, but she loves Elias and her own family and it is evident that she has a good heart. Her love is obstructed by her duty, and overall it’s very messed up… and sad to read. In a way, I do feel bad for her, but I cannot say that I really learned to like her all that much – not as much as some of her colleagues that we get to know here.

Next, we move on to the real big baddies, the nastiest of the bunch. Here comes Marcus, the Emperor, as well as the Commandant. I can testify to you all right now from this seat that I’m sitting on, that I absolutely H-A-T-E them both. There are more such characters in here, ones that I really loathe, but these two – oh boy. They are the most wrath-indulging of the bunch. Although I’m only mentioning human ones… since as you know, this world does have magic – which is one of the things I most love in this book.

As for the plot, it was definitely more intense than the last one. The story felt very fast-paced, there was no chance of boredom there. What I especially loved was that the action was backed up by emotion, intensity, and gruesome parts all alike. You don’t get much chance to breathe, but I liked it – it’s all hell breaking loose here.

The world, as in the first book, I really loved once again. Here we got to see more of the Empire, and the overall picture of it grew more complete and it also gave more depth to the story. We learned more of their customs, culture, costumes… (although I’m still not fully satisfied without a map – give me a map!) The Empire is very easy to visualize, but I feel that this book, if any, could use a map for its wonderfully developed world.

Lastly, the writing was emotion-packed, intense, and gripping. Aside from being highly enjoyable, it was also very easy to read. Even with all the action, which this book has an abundance of, there is always space for character development, which I highly respect. There a twists in such a number that even if you see some coming, most of them… you DO NOT.

Just like the last book, this one took my emotions to the limit… this book lifted an already amazing series even higher in my books (no pun intended) and I feel like it’s getting better and better. Overall it’s a great story which I highly recommend reading.

One thought on “A Torch Against the Night by Sabaa Tahir”