Bestselling author Laurie Faria Stolarz returns with Jane Anonymous, a gripping tale of a seventeen-year-old girl’s kidnapping and her struggle to fit back into her life after she escapes.

Then, “Jane” was just your typical 17-year-old in a typical New England suburb getting ready to start her senior year. She had a part-time job she enjoyed, an awesome best friend, overbearing but loving parents, and a crush on a boy who was taking her to see her favorite band. She never would’ve imagined that in her town where nothing ever happens, a series of small coincidences would lead to a devastating turn of events that would forever change her life.

This was not an easy book to read by any means but it’s a fantastic one. It took me some time to gather my thoughts because of the topics this book handles.

The thing is, I really enjoyed this book and it hits hard and it’s as realistic as it could ever be. But I wanted it to dwell even more on the trauma and mental health aspects, and less in the mystery part as I solved it right at the beginning and believe many of you might too…  That was my only negative-ish point.

So, let’s get to what I loved about it. This is Jane’s story. Everything in her life seemed to be going great until she was kidnapped and held captive for 7 months. This book tells her story like a diary, retelling all that passed from the beginning when she was taken until now, 3 months after she returned home. It jumps from past to present (which isn’t one of my favorite things but it worked perfectly here) and holds your attention from the very beginning in a way that’s impossible to put it down no matter what.

It was really hard to see Jane dealing with everything while she was captive, and it was hard seeing her cope after the nightmare ended… It’s like a new one started, where one would think everything would be better. I can’t even imagine being in Jane’s situation but her feelings, the panic, the withdrawal, are afterwards present after many other abusive situations, so it really hits hard.

Jane is a very relatable character because she was just a normal 17 yo girl when everything went wrong. And seeing her broken like that… It was so impactful! Jane’s emotional, heart-wrenching, terrifying survival journey was remarkably told. I could feel Jane’s feelings, fears and questions so well. I literally loved the writing and how on edge it put me.

I was especially taken aback by how well put together was her slow recovery. It felt so real and hard to read! It made me cry and many moments were just… Like I said, this book was incredibly and realistically written and I would recommend reading it with caution. It’s unlike anything I’ve read and I couldn’t recommend it enough.

Wrapped Up for Christmas by Katlyn Duncan

Having lost her boyfriend, job, and apartment all in the space of a week, Angie has no choice but to leave California and return to her family in New England.

Determined not to let life weigh her down, Angie finds work at the local mall where she worked as a teenager. After an embarrassing run-in with a handsome stranger, Nick, she’s convinced her luck is about to change.

But Nick has secrets of his own… and as the first flakes of snow begin to fall, Angie can’t help but wonder if she’ll ever find love.

This was so adorable! I literally could put this down and read it in two sittings. Such a feel-good story!

This is Angie’s story. She just had a bad break-up, lost her job and had to move home to her parent’s house. Needless to say, this was not how her Christmas was supposed to go. Nonetheless, Angie makes the best of it and enjoys the comfort of being near her family and friends, finds a new job even if it’s not ‘the’ one, and even a new romance. It’s not easy for her to put herself so soon in a romantic situation but sometimes life just happens… it might not go how you predict but it might just go where it should.

Angie was the kindest sweetest person and I loved how much she cared for everyone around her. She’s intelligent, self-sufficient, strong and I loved to see her ultrapass every obstacle life put in front of her. I also loved how much initiative she had and how much she worked for something she believed in. It was beautiful to see and we need more of those thoughts and actions!

I loved her friendship with Reese and how sweet she was for everyone near her. Reese was very different from her, a lot more blunt and harsh but with a heart of gold. Their friendship was beautiful and I dearly enjoyed their moments together.

As for our love interest, Nick. He was definitely a good guy with his heart in place even if sometimes his actions didn’t shine through the way they were supposed to. I loved seeing him with Angie and I could feel their spark and attraction through the pages. Their romance started quite fast but sometimes that’s just how it is, and it doesn’t mean it’s not right. I loved them together and I think they were perfect for each other.

This book is full of holiday cheer, sweet moments, it’s a fair share of drama and a lot of romantic moments.

If you’re a fan of sweet, feel-good Christmas stories this is for you! It was gripping and just the perfect holiday book to curl up and read on a cold day. 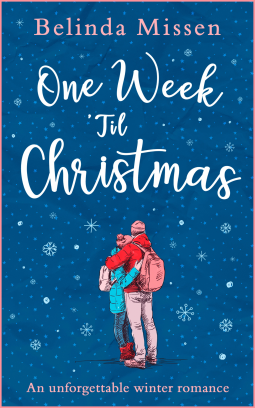 One Week ’Til Christmas by Belinda Missen

Isobel Bennett is waiting for the number 11 bus when a man quite literally falls into her lap. Snow is falling, Christmas lights are twinkling, and a gorgeous man with dark brown hair has just slipped on ice and is now pressed against Isobel.

Isobel knows she’s not imagining the chemistry between them. But then his ride arrives and, embarrassed, he beats a hasty retreat, murmuring apologies – and Isobel realises only too late that she didn’t manage to catch his name…

When she runs into him again the next morning, she decides it’s fate.

It’s a second chance for Isobel and Tom – but there’s only one week until she’s leaving London for good. Seven days of enjoying all the festive delights the city has to offer: ice-skating at Somerset House, mulled wine on the Southbank, Christmas shopping at Liberty.

There’s magic in the air and mistletoe in the trees – but what will happen when the week is over?

For fans of Josie Silver, Lucy Diamond and Marian Keyes, this is one Christmas romance you don’t want to miss!

– I know Christmas has already passed but I’m still making my way through Christmas books because they just make me feel happy and I didn’t have all the time I wanted to read them before Christmas so… I will be reading them hopefully all through January. –

One Week Til’ Christmas was a super adorable romance. We follow Isobel through her week before Christmas in London. But this was far from a normal week for her. Right at the start of it, she has a man literally sending her into a gutter. And that’s not the only time she will have to face him…

This is a very light-hearted and funny Christmas book. It completely made me feel all warm and Christmas-y and smile all the time while reading it. It was extremely gripping and I just wanted to know what was gonna happen next. As you probably noticed, chick-lit is not the most unpredictable of reads and I saw where this one was going right from the start. But that didn’t make me enjoy it any less.

The romance between Isobel and Tom was steady and cute. Nothing rushed or crazy. It was freaking adorable and I loved it. As were Isobel’s friendships, they were so sweet and so positively realistic! It’s just impossible not to feel good while reading this.

I generally am not a fan of famous characters in books, mainly because they tend to be hard for me to connect with them, but this was quite different. We were able to see the actual person behind the famous face, in a realistic and adorable way. It also talked about how difficult it is to maintain connections with especially family when you are always traveling for work (or just generally working which happens in many jobs). The strain it causes, the harsh words and sad feelings were all there and it made it quite realistic.

I often cry reading romances and this was no different, it was cute, emotional and I loved the pacing.

I would especially recommend it if you’re into Christmassy or feel-good books!