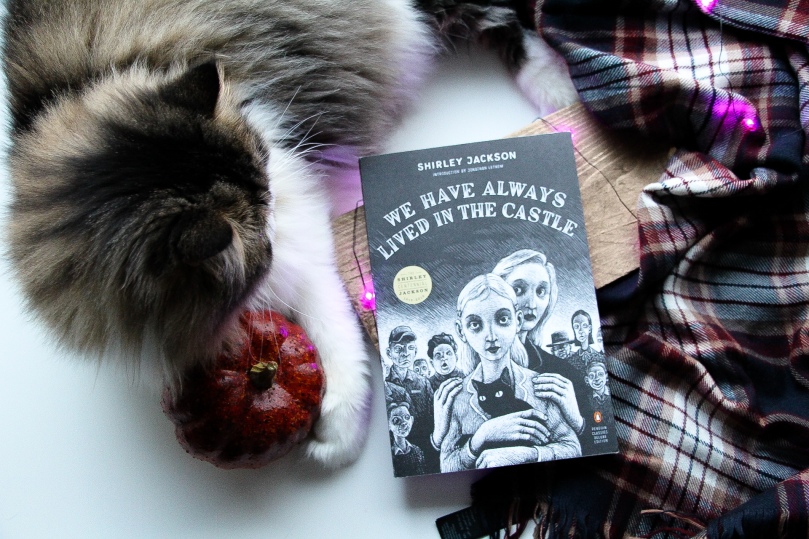 Merricat Blackwood lives on the family estate with her sister Constance and her Uncle Julian. Not long ago there were seven Blackwoods—until a fatal dose of arsenic found its way into the sugar bowl one terrible night. Acquitted of the murders, Constance has returned home, where Merricat protects her from the curiosity and hostility of the villagers. Their days pass in happy isolation until cousin Charles appears. Only Merricat can see the danger, and she must act swiftly to keep Constance from his grasp.

I loved this so much! At first, I wasn’t sure if I was going to like it because it’s quite weird,  the beginning is a bit slow and sometimes difficult to understand/get into. But it was amazing! Behold, one of my new favorite classics!

The novel is fairly slow, but it’s gripping, especially after half way I couldn’t stop reading it. Even in class, I was sneaking glances at the book and trying to read, that’s how much I loved it. It’s a story like no other, it will deceive you, it will make you sad, angry, tense and lost.

I think the best part of this book, if not the story, is the characters or even the feeling the book has. Who am I kidding? They all had something that made it stand out. Starting with the characters, my favorite has to be Marricat. She is such a unique character! She is dreamy, weird, wild, sweet, … She is just so different from any character I’ve read about. She is just a child and although we can see that easily, she is certainly not the typical one. Because of her family’s tragedy, she is an outcast, as well as her sister Constance and their uncle. Whom I also adored!

After the murders that occurred in their family, the villagers started hating them and even being mean to them. Being in between the line of laughing at them and being afraid of them. I was really angry at those characters, which is odd because I never thought I would sympathize with the murderer…. But I also understand why I did it.

Not everything is as it seems and people do repent, as we see in parts of the novel. Plus that’s not a good reason enough to hate everyone they are connected with, or treat someone bad. It’s difficult to explain because I do understand why they hate them, and I’m not sure I wouldn’t do the same, but the thing is… We never know the full story. I feel that it would be normal to hate them. But after actually knowing them, I can’t and that’s weird. Only a hell of a good writer could make me so conflicted…

This book really leaves an odd feeling and the setting is just incredible. And I love all the gothic stuff in the novel… I always do. It’s super detailed and I really have a clear image of the castle and all the people around it. I hate a lot of the characters in this book and that made me even connect more with the ones I loved. The only thing is that it’s a bit slow in the beginning. I took a while to enter into the story, but it starts gripping after some pages!

It’s really difficult to explain this book without giving in too much. And for sure my review can’t express enough how interesting and different this book is, but I would definitely recommend you to try reading it. If you are into mystery, gothic settings or overall weird novels with deep meanings.

Have you read this novel yet? What did you think of it? Let’s discuss it in the comments below!