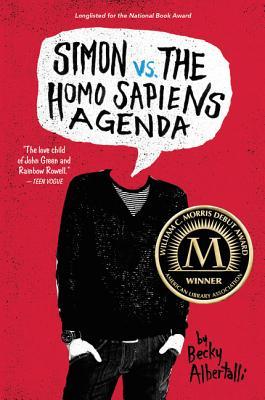 Sixteen-year-old and not-so-openly gay Simon Spier prefers to save his drama for the school musical. But when an email falls into the wrong hands, his secret is at risk of being thrust into the spotlight. Now Simon is actually being blackmailed: if he doesn’t play wingman for class clown Martin, his sexual identity will become everyone’s business. Worse, the privacy of Blue, the pen name of the boy he’s been emailing, will be compromised.

With some messy dynamics emerging in his once tight-knit group of friends, and his email correspondence with Blue growing more flirtatious every day, Simon’s junior year has suddenly gotten all kinds of complicated. Now, change-averse Simon has to find a way to step out of his comfort zone before he’s pushed out—without alienating his friends, compromising himself, or fumbling a shot at happiness with the most confusing, adorable guy he’s never met.

This was undoubtedly extremely cute. It took me so long to get to this book… But I’m really happy I did because I loved it.

This is an amazing coming-of-age story about a gay teenager named Simon. He is in the process of understanding who he is, how much he changed from time to time and trying to be open about his feelings.

We all know that being in high school is not the easiest thing ever, and to be honest if you think it is, I am extremely happy for you because I’m not even gay and still managed to have a hard time. It’s just that everything ends up being a big deal, where people are mean and don’t think before they act, so I can’t even imagine how hard it must be to come out during that time. But I believe this book is the most realistic thing I’ve seen. I talk about how being straight shouldn’t be the default and everyone should come out as whatever they are. It talks about how a person should never be taken away from the opportunity of doing such a personal thing themselves. And it also has a lot of diversity in it, more than featuring a guy romance it also features interracial couples. It’s just amazing and deeply emotional.

Simon is an amazing character, I really like how funny and simple he is. I believe he doesn’t know how precious he is and that’s what makes him amazing. He is just so easily approachable, friendly, silly and sweet. It’s endearing. If he wasn’t gay, I would totally love him, heck I do love him anyway. But have to admit that I would never want him and his boyfriend to separate, so I guess I would be just content enough if I was his friend. I’m not going to say his name just in case someone as silly as me has taken this long to read the book, but I love their romance. It’s the sweetest thing, and the author does a good job of keeping it a bit of a mystery. They are adorable and I would love to know more about his boyfriend and about them together because it’s goals.

I also really like how the author showed the reality of things. How difficult it is to come out, how some people don’t accept it / just make fun of it. It’s very enerving but it still happens today, so I think this is a really important book. She also showed some friendship problems that are also very common to happen at that time and it just added something more, because I really liked all the characters in this book. Well, not all but most. Even the dog, he is freaking adorable!

This is not the first book I read by the author, and I liked her writing in the previous one too. It’s just so simple to read, so laid back, you know what I mean? It’s relaxed and full of humor and I love it.

This was for sure an amazing book and I could not recommend it more. It’s amazing and it made me extremely excited for the movie!!

2 thoughts on “Simon vs. the Homo Sapiens Agenda by Becky Albertalli”